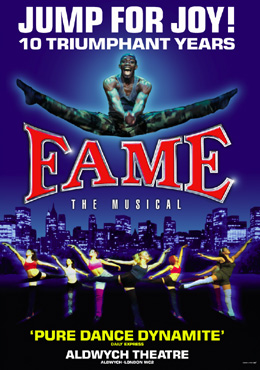 As the musical opens we meet a variety of students from New York City who are all praying that their application to the prestigious High School of Performing Arts is successful. We begin to see the lives of the major characters as well as their hopes and ambitions, as the teachers enter and tell their respective classes that their own discipline is the hardest in the world. We hear about the ‘hard work’ that everyone has to put in in order to succeed.

During Mr Myers’ drama class we meet Nick Piazza who is a wannabe actor. He is serious about his future prospects and catches the eye of Serena Katz during a scene, but Nick is more interested in impressing his teacher. During dance class Joe tells the group how he finds it hard to ‘keep it down’ when he sees and attractive girl and breaks into a full routine. Tyrone is finding it hard to understand the discipline of classical ballet and is mocked by his partner Iris. He tries hard to show Miss Bell that he has the skills needed to be a dancer and expresses his frustration through a rap. Iris is instantly impressed and kisses him.

In an effort to get Nick to notice her, Serena suggests they rehearse a love scene but he continues to ignore her advances. In music class Carmen interupts Scholmo’s violin playing and suggests lyrics to go along with his music and they enjoy playing together. As the year meet together in the lunch room they dream about seeing their name in lights and living a famous lifestyle. Miss Sherman is angry at Tyrone’s attitude and threatens to throw him out of school if he cannot improve his grades. Miss Bell argues that his dancing is good enough to keep him there, and the teachers argue between themselves. Tyrone overhears them and threatens to walk out.

The second act begins with a fall festival and the students all perform together. An overweight dancer Mabel stresses about her size and body and decides to transfer to acting to stand a better chance. Serena is pleased to get the part of Juliet in their class production of ‘Romeo and Juliet’ but is upset that her Romeo will be played by Joe and not Nick. There is speculation that Nick might by gay, but Serena tells people otherwise. She struggles to contain her emotions and has to think of Meryl Streep in order to feel happy. Schlomo finds out that Carmen is thinking of leaving the school to move to LA and accuses her of taking drugs.

In an English class Miss Sherman humiliates Tyrone by getting him to read aloud. He tells her she is being racist and she slaps him. Tyrone retaliates by telling the class that he will be a dancer and writes ‘I Will Read’ on the chalk board. Miss Sherman is touched and sings about the feelings she has for all of the children under her wing.

During acting rehearsals Joe is not taking his role seriously, and Nick steps in to help, ending in a stage kiss between him and Serena. Tyrone is upset with Iris for ignoring him and reads her Walt Whitman’s ‘Leaves of Grass’ to show that he does have a serious side to him. Miss Bell admits to fiddling Tyrone’s grades to help him graduate and tells him he needs to repeat the year. Carmen arrives showing signs of drug abuse and tells Schlomo about the fun she has had in LA. He makes her promise to quit drugs and sort her life out.

The class prepare to graduate and Nick finally tells Serena that he likes her, and they promise to stay together after school ends. Carmen has died from a drug overdose, and the whole class sing a song in her honour.