Brigadoon is a Scottish fantasy about a town that disappears into the Highland mist and returns for only one day every one hundred years. It includes Waitin’ for My Dearie, I’ll Go Home with Bonnie Jean, Come to Me, Bend to Me, Almost Like Being in Love, There But for You Go I, The Heather on the Hill and My Mother’s Weddin’ Day. This is a tribute to simplicity, true love and goodness, which is hidden from the ordinary traveler. 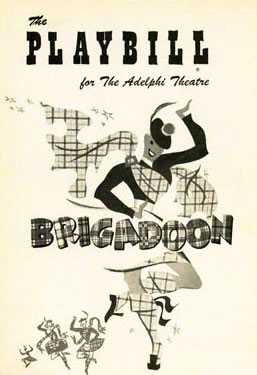 A New York couple Tommy and Jeff travel to the Scottish Highlands to hunt for game, but they get lost on their first attempt at hunting. They hear mystical music (“Brigadoon”) and a village appears that isn’t on their map. They decide to enter the village to find out directions back to where they are staying. Once they arrive they notice that a village fayre is underway (“McConnachy Square”) and see that everyone is dressed in their own form of tartan. Andrew MacLaren’s youngest daughter Jean is set to be wed to Charlie Dalrymple and their whole family come to visit the village in order to buy products for the wedding. Youngster Harry Beaton is in love with Jean and is upset that she is already engaged, whilst Jean’s oldest sister Fiona says that she is “Waitin’ For My Dearie” before she ever gets married.

Tommy and Jeff observe the village and enquire about where they are. Fiona notices them and invites them to her family home to rest and get some dinner. Sassy Meg Brockie the dairy maid is instantly attracted to Jeff and leads him away. She takes him to the forest but he rejects her advances and she is upset as she sings (“The Love of My Life”). As Charlie celebrates his last night as a single man (“Go Home to Bonnie Jean”) Tommy reveals that he is also engaged but in no rush to get married. Fiona tells him that she likes him a lot.

As the wedding preparations continue Jean’s friends help her pack to move out of the family home, (“Jeannie’s Packin’ Up”). Charlie tries to see the bride before her wedding day but the girls send him away (“Come to Me, Bend to Me”). Jeff returns and finds that Tommy is in love (“Almost Like Being in Love”). They look at the family Bible and realise everything is dated from 200 years ago. As they enquire, they are told to speak to Mr Lundie.

Mr Lundie explains to the New Yorkers that Brigadoon only appears to the normal world once every 100 years after a pastor prayed to God to protect the town. No one is allowed to leave, and life goes on as normal. Tommy asks if others are allowed to join the mythical town and is told that a stranger can only stay if he loves someone enough. They are told that if anyone leaves Brigadoon then it will disappear forever.

As the wedding begins the clans arrive from the neighbouring towns to celebrate with national dances. Harry is upset that Jean is married and tries to kiss her, forcing him to run away saying that he will leave Brigadoon and make it disappear forever.

The second act opens as the men of the town are searching for Harry before he leaves Brigadoon (“The Chase”). They find him dead, crushed by a rock but decide not to tell the town until the next day. Tommy and Fiona embrace, admitting their feelings to each other (“There But For You Go I”). The end of the day is near and Tommy decides to stay in Brigadoon forever.
Meg continues to celebrate with the town as she tells of “My Mother’s Wedding Day” and the company dance, before a funeral takes place for Harry.

Tommy tells Jeff of his plans to stay in Brigadoon but Jeff is furious, and convinces him the whole thing is a dream. Jeff confesses that he accidentally killed Harry after tripping him as he ran away. Tommy is shocked and tells Fiona that he has doubts about staying (“From The Day On”) and as the day ends, she fades away into the darkness.

Back in New York Tommy cannot seem to get Fiona out of his mind, despite his fiancée Jane being a beautiful socialite. As they plan their wedding he hears the music of Brigadoon, and he eventually tells her that they cannot get married. Tommy tells Jeff that he wants to return to Scotland even though he knows the village won’t appear.

As they arrive to the spot where they first came across the town, Tommy is upset when nothing appears. Suddenly they hear the music and Mr Lundie appears out of nowhere. He tells Tommy that anything can happen if you love someone enough, and Tommy crosses the bridge with him into the highland mist to reconcile with Fiona, leaving Jeff alone.