Based on the Charles Addams characters featured in cartoons and films, The Addams Family is a Broadway musical with score by Andrew Lippa and book by Marshall Brickman and Rick Elice. America’s favourite ghoulish family come to life in a spectacular production that ran at the Lunt Fontaine Theatre in 2010 for over a year. The macabre family were brought to life by Nathan Lane as Gomez and Bebe Neuwirth as Morticia, and received popular praise from fans of the characters and movies. The show featured an eclectic score inspired by Broadway composers such as Stephen Sondheim and included large ensemble numbers such as ‘When You’re an Addams’ as well as more intimate songs such as ‘Happy/Sad’. The show has enjoyed a successful US tour and is preparing to mount a production in Australia in 2013. 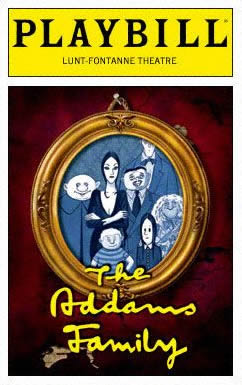 The comic strip ‘The Addams Family’

The macabre Addams family join together in a visit to the graveyard for the annual gathering of ‘living, dead and undecided’ family members. They celebrate exactly what it means to ‘be an Addams’. Uncle Fester asks the gathered family to help him in his mission as Wednesday Addams has invited her new ‘normal’ boyfriend and his parents round for dinner. Wednesday tells how she feels ‘pulled’ in a new direction by boyfriend Lucas Beineke and worries about her family’s reaction whilst torturing her brother Pugsley. Her parents Morticia and Gomez worry about their daughter and question “Where Did We Go Wrong?”

As Lucas’s mother and father Mal and Alice arrive, Wednesday tells her family to act as normally as possible so they can have a good time. As they are greeted by Lurch at the door it seems clear that this is going to be a far from normal night. The Addams family fail to act ‘normal’ and Wednesday enters wearing a bright yellow dress. She and Lucas reveal that they want to get married and tell their parents that evening. Gomez introduces Mal to the family and the giant pet squid Bernice. Mal wants to rip down the whole house. Alice tells Morticia that all the passion has gone out of her marriage, but Morticia refuses to dance with Gomez after Wednesday describes her as being old. Pugsley is worried that Wednesday will not want to torture him anymore and steals a potion from his Grandma to bring out someone’s dark nature. He plans to use it on Wednesday over dinner.

Alice accidentally takes the potion intended for Wednesday and admits to everyone during a game of truth that her marriage to Mal is loveless and that she is miserable. Mal tries to leave, but Wednesday and Lucas drop their wedding bombshell which turns the party into disarray. Uncle Fester gets the family ancestors to create a sudden storm which traps everyone in the house.

Wednesday and Lucas have their first fight whilst Morticia is worried that she is superfluous to her family’s needs, reminding herself that death is “Just Around the Corner”. Pugsley is scared to confess what he did to Alice and Uncle Fester confesses his love to the moon. Gomez laments about how he is happy that his daughter is in love, yet sad she is leaving him. This makes Wednesday worry that her and Lucas are too different to ever be together. They argue over who is crazier.

Gomez and Fester try to get Mal to express himself but refuses to. He goes for a swim with Bernice the squid which reminds him that he does indeed love Alice. Gomez reaffirms his love for Morticia and they begin to tango.

Everyone is reunited and Pugsley finally admits to giving Alice the potion. Fester announces that he is flying off to see his love, the moon. They come together as one larger family.