Andrew Lloyd Webber’s iconic musical Cats is one of the most successful musicals ever produced. Both the West End and Broadway productions held the record for the longest ever running musical, amounting to over 14,000 performances in both cities combined. The show uses TS Eliot’s ‘Old Possum’s Book of Practical Cats’ for its inspiration and libretto and is extremely dance heavy. The show doesn’t follow the usual linear format, instead it combines a number of stories to give an overall concept. 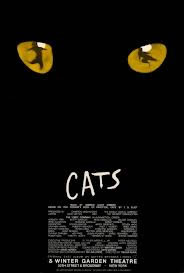 Cats meet in a junkyard to dance at a Jellicle Ball. The leader of the pack selects the dirty cat to be reborn in Eliot’s iambic ballet.

As the Jellicle Moon rises over an abandoned junk yard a number of cats entertain themselves and tell the audience exactly what it means to be a Jellicle cat. We are introduced to their different personalities and find out about ‘The Naming of Cats’. They begin to present their case for one cat to be reborn in The Heaviside Layer, chosen by their leader Old Deuteronomy. First to make their claim is the Old Gumbie Cat whose charitable work includes schooling the mice and making beetles dance. The Rum Tum Tugger is a mysterious cat who is contrary in his opinions and a remarkable hit with the female felines. Bustopher Jones, the St James’s Street Cat shares his upper class values and is entertained by the younger kittens. A flash of lightning scares the group and whispers of Macavity scare some away. It is actually the famous cat burglars ‘Mugojerry and Rumpleteazer’ who work together in a life of petty crimes. The tone shifts when Grizabella the Glamour Cat makes an appearance with a torn coat and shoddy appearance. Whilst many cats shun her, some are more sympathetic. The entrance of Old Deuteronomy causes some excitement as he arrives to select which cat is to be reborn. The cats entertain him by narrating a story about the battle between the Pekes and the Pollicles, before the time arises for the Jellicle Ball to commence. As the cats dance for joy, Grizabella enters and sings of her ‘Memory’.

Old Deuteronomy tells the tribe about the ‘moments of happiness’, introducing them to Gus the Theatre Cat, who recounts his tales of the stage. He tells a dramatic story of Growltiger the pirate who was in love with Griddlebone. As his story comes to an end, Skimbleshanks the Railway Cat is caught sleeping and tells of his life on the sleeper train from London to Scotland. His song is brought to an abrupt end by Macavity the Mystery Cat, and the whole gang, flee, and Old Deuteronomy goes missing. The other cats fight with Macavity, and it is up to Mr Mistoffelees to magically bring their leader back. Old Deuteronomy then makes his Jellicle choice and chooses Grizabella to journey up to the Heaviside layer and be reborn. As she disappears on a floating tire, he has one final word for the audience on how to address a cat.

Winner of the following Tony Awards