Assassins features a score by Stephen Sondheim and book by John Weidman. The show is a one act musical that brings together men and women who have assassinated and attempted to assassinate American Presidents since John Wilkes Booth shot Abraham Lincoln. The show is made up of a series of vignettes which bring these characters together across different time frames. The original Off Broadway production was moderately successful, but the 2004 revival (which was postponed initially after the 9/11 terrorist attacks) helped the show become popular. 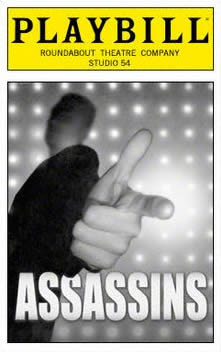 In an abandoned fairground, the Proprietor invites the assassins to take a gun in his shooting gallery. One by one, John Wilkes Booth, Leon Czolgosz, John Hinckley, Charles Guiteau, Giuseppe Zangara, Samuel Byck, Lynette “Squeaky” Fromme, and Sara Jane Moore take their guns and assert that their lives would be better if they each killed a president (“Everybody’s Got the Right”).

The Balladeer enters and sings “The Ballad of Booth,” relating John Wilkes Booth’s story after he killed Abraham Lincoln. Holed up in a barn with a broken leg, he is trying to write his manifesto, explaining his reasoning for assassinating the President. As the Union army arrives and demands his surrender, he throws his diary to the Balladeer and urges him to tell his story. Booth realises that his death is in vain before committing suicide. The Balladeer declares that Booth was insane and his terrible act inspired other lunatics to commit more violent acts.

The men drink in a bar and debate the merits of the American dream. Zangara complains of pain in his stomach, and the others assure him he will feel better if he kills Franklin Roosevelt. The Proprietor narrates a radio broadcast and reveals that Zangara’s assassination attempt has gone wrong and he has accidentally killed the mayor of Chicago instead of President Roosevelt. As he prepares to be executed by electric chair, Zangara asserts that he is glad as long as he killed one of the men who control the money, though he laments that as an “American Nothing” he is not achieved the legendary status he had hoped for.

Leon Czolgosz approaches anarchist Emma Goldman after a lecture and declares his love for her. She immediately rebuffs his advances and encourages him to turn his love into a fight for social equality. Meanwhile Squeaky Fromme and Sara Jane Moore smoke pot and eat fried chicken on a park, before deciding to follow in the footsteps of cult leader Charles Manson and kill Gerald Ford. Booth, Guiteau, Moore, and Csolgosz reflect on a gun’s ability to change the world forever (“The Gun Song”), before Csolgosz shoots and kills President McKinley.

In a dirty Santa suit, Samuel Byck records a message to Leonard Bernstein ordering him to write more love songs and chastising him for ignoring his previous messages. He decides to get attention by flying a plane into the White House in the hopes of killing Richard Nixon. John Hinckley obsesses over Jodie Foster, and Fromme at first mocks him before deciding he is in a similar situation to her unrequited love for Charles Manson (“Unworthy of Your Love”). Hinckley decides to get Foster’s attention by killing Ronald Reagan.

Charles Guiteau hits on Moore, and when she rejects him he declares he will be the ambassador to France. He seeks out President James Garfield and asks to be made ambassador, and when the President refuses, Guiteau shoots and kills him. He remains seemingly oblivious of his fate as he strolls into the noose made for his hanging.

Moore and Fromme attempt to kill Ford, while Byck sets off to kill Nixon, with both attempts failing spectacularly. The assassins assemble at the Proprietor’s once again where they slowly realise their attempts to change the world have failed. The Balladeer encourages them to find more positive ways of pursuing the American Dream, but they refuse, instead crafting “Another National Anthem.”

In 1963 Dallas, Lee Harvey Oswald is contemplating suicide while the other assassins arrive and convince him to kill John F. Kennedy with their assertions that he will become famous across the globe. Average Americans discuss the day’s events and the way the assassination has changed the country forever (“Something Just Broke”). The assassins come together for a final time, restating their right to be happy at any cost (“Everybody’s Got the Right – Reprise”).