Anything Goes is one of America’s most popular musicals. It has frequently been re-written, although the current licensed version reflects the changes made in the 1987 Broadway revival. The show features music and lyrics by Cole Porter, and book by Guy Bolton, P.G Wodehouse, Howard Lindsay and Russel Crouse. The show is set in the American Jazz age aboard a cruise liner from New York to London. The musical features a famous score of songs including ‘Anything Goes’, ‘I Get A Kick Out of You’ and ‘You’re the Top’ which have since become show standards. 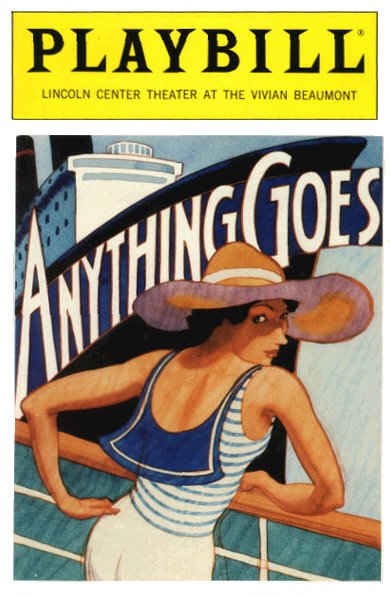 Passengers begin to board the Ocean Greyhound America, an ocean liner bound for London from New York. All hope celebrities will be on board, and are pleased at the arrival of Reno Sweeney, a former Evangelist who became a nightclub singer. Billy, a dashing Wall Street executive arrives to bring his boss Elisha Whitney his passport and is pleased to bump into his old friend Reno.

Just as Billy is about to disembark the ship, he runs into Hope Harcourt, a beautiful girl he met one evening in Central Park and has been pining for ever since. Hope is equally besotted, but is on the ship with her fiancé Sir Evelyn Oakleigh, a befuddled wealthy Englishman her overbearing mother wants her to marry. Billy decides to stay on board to rekindle his romance with Hope, despite not having a ticket.

Unbeknownst to the rest of the ship, Moonface Martin, a gambling gangster, is on board. He is currently number 13 on the nation’s most wanted list and hopes to move up to the number one slot. Billy inadvertently identifies an innocent Bishop as Moonface to the FBI, and Moonface is in his debt. He gives Billy the passport and ticket of his accomplice, Snake Eyes, who was supposed to be on board but was warned against sailing.

Sir Evelyn is seasick, leaving Billy and Hope alone for the evening. When Billy returns to his cabin, he discovers that his boss, Mr. Whitney is in the next room. Moonface, now posing as a clergyman, steals Whitney’s glasses so he does not have a chance to recognize Billy. The FBI begins searching the ship for Billy, who they believe is the real Snake Eyes, so he disguises himself as a sailor. Reno sees through the disguise, but upon hearing the situation agrees to help Billy by distracting Sir Evelyn, who she finds charming. The authorities finally capture Billy, but the passengers are thrilled to have another celebrity on board, even though he is supposedly public enemy number one, and want him to remain amongst them.

While Reno and Sir Evelyn begin to fall in love, Hope is dismayed at Billy’s continued lie. The ship’s Captain asks Moonface, who he believes to be a minister, to perform a service to cleanse “Snake Eyes” of his sins. At the service, Billy finally confesses he is not Snake Eyes, Moonface reveals he is not a minister, and they are both locked in the ship’s brig. Billy is heartbroken not to be with Hope, and the situation is worsened when Hope arrives to tell Billy she is to be married to Sir Evelyn within the hour at her mother’s insistence.

Moonface and Billy manage to exchange clothes with two fellow inmates and escape just in time to stop the wedding. In the end, Hope and Billy, Reno and Sir Evelyn, and Mr. Whitney and Mrs. Harcourt all end up together while Moonface Martin is devastated to be removed from the FBI’s most wanted list.