Stephen Sondheim’s 1984 musical Sunday in the Park With George is regarded by many as his finest and most autobiographical work. The composer collaborated with James Lapine, inspired by the painting ‘A Sunday Afternoon on the Island of La Grande Jatte’ by French painter Georges Seurat, and came up with a complex musical that switches between two time frames. Act One concerns the character of Georges and the characters of his painting, which Act Two set in modern day New York. Sondheim composed the score in a similar way to Seurat’s painting style, pointalism, only using notes that are clustered together in the scale. The musical won the 1985 Pulitzer Prize for Drama, along with numerous Drama Desk and Olivier Awards. The last major revival opened in London at the Menier Chocolate Factory and transferred to Broadway in 2008. 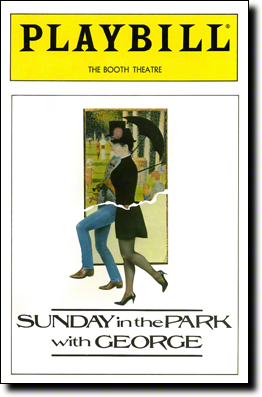 In 1884 Paris, George Seurat is making sketches to prepare for his famous painting “A Sunday Afternoon on the Island of La Grande Jatte.” His partner, Dot, is modeling for him despite her frustrations. The scene shifts to an art gallery where Georges’ artist friend Jules and his wife Yvonne remark that his work has “No Life.”

Back at Georges’ studio, Dot is eagerly preparing for their trip to the Follies, but once again Georges chooses his painting over Dot and they do not go.  Back on the island, Dot turns up with a new beau Louis, which prompts two girls, both named Celeste, to “Gossip” about them. The girls set their sights on a pair of sailors who have arrived. Jules berates Georges for what he views is his poor artistic skills. Dot laments losing Georges, but decides that being with Louis was the right choice (“Everybody Loves Louis”). The Celestes fight over the soldiers, with each of them wanting “The One on the Left.”

As everyone leaves the island, Georges is sad to have lost Dot, but realizes that art will always take precedence for him (“Finishing the Hat”). Dot arrives at his studio to reveal she is carrying his child but will soon be moving to America with Louis. Yvonne and Jules arrive to convince Georges to give up his unconventional method of painting, but he refuses. After they leave, Dot and Georges finally agree they will never work as a couple (“We Do Not Belong Together”). At the park again, all of Georges’ subjects are squabbling before he finally asserts his control and paints the simple harmonious scene he wants as the characters form their famous tableau (“Sunday”). The subjects in the painting remark on how they dislike being stuck in the same spot (“It’s Hot Up Here”), before revealing their sadness at Georges’s premature death at the age of 31.

In 1984 New York City, Georges and Dot’s great-grandson George is also an artist and reveals his latest creation, “Chromolume #7” which was inspired by Georges’ famous painting. George’s grandmother (Georges and Dot’s daughter) Marie arrives to help with his presentation. The art critics are very impressed with the work, but George still finds it difficult to maintain a career in art (“Putting It Together”). Marie reflects on her pride at the family’s legacy (“Children and Art”).

A few weeks later, Marie has died, and George has arrived in Paris to present his work on the island that inspired Georges’ painting. He reads from a book Dot passed down to Marie and reflects on his similarities to his ancestor. A vision of Dot appears and encourages George to continue to pursue art (“Move On”). The characters from the painting resume their positions in the tableau (“Sunday”) before disappearing, leaving only a blank canvas with unlimited possibilities.

Winner of the 1985 Pulitzer Prize for Drama.