Seussical the Musical is a modern musical that brings together the stories of American children’s author Dr. Seuss. Combining loveable characters such as The Cat in the Hat, Horton the Elephant, The Sour Kangaroo and Amazing Mayzee, the show had moderate success on Broadway, and no professional London production has been attempted. The show is a very popular choice for school groups in America. Flaherty and Ahrens’ score was well received. 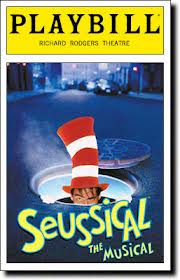 The Cat in the Hat arrives and welcomes the audience to the show, telling them to let their imagination go wild (“Oh The Things You Can Think!”). We arrive in the Jungle of Nool, where Horton the Elephant hears a peculiar noise from a small speck of dust, (“Horton Hears a Who”). He places it on a four leaf clover to protect it from the other animals, who mock him for being able to hear it. Gertrude McFuzz acts as his only friend and begins to fall in love with Horton. As the voices continue to get clearer, the Mayor of Who tells Horton about their very small and very fragile planet, as The Cat in the Hat zooms in on the whole land, (“Here on Who”).

Jojo, the mayor’s son is a daydreamer and is told off by his parents for thinking ‘thinks’ that often distract him from everyday life, especially his school work. He continually tries not to think as much, but he begins to imagine that his bathtub is McElligot’s pool, and everything spins out of control, (“It’s Possible”). The Mayor and his wife are worry about “How to Raise a Child”, and they decide to send him to military school to correct him. The school is run by the tyrannical General Genghis Khan Schmitz who picks fights with other people and has declared war on those people who eact their bread with the butter side down, (“The Military”).

Horton the Elephant meets the small Jojo and they bond about being socially excluded, (“Alone in the Universe”). Gertrude wonders why Horton isn’t in love with her and thinks it is because her tail is small and has only one feather. She is upset and seeks help from Mayzie LaBird who has a beautiful tale. She is told to get pills from Dr Dake who lives by the lake, and Mayzie tells her that it will make her tail beautiful, (“Amazing Mayzie/Amazing Gertrude”). Gertrude overdoses on the pills and her tail grows out of control.

Meanwhile, Horton is attacked by the Wickersham Brothers, a gang of naught monkeys that steal his clover, that ends up getting lost in a large field of identical clovers (“Chasing the Whos”). The audience are told by The Cat in The Hat how lucky they are to not be a Who, (“How Lucky You Are”). Horton attempts to find the clover in the field whilst Gertrude continues to struggle to get Horton to notice her and she takes more pills, (“Notice Me Horton”). Mayzie has been left with an egg and begs Horton to look after it so she can have some time off. She flies away and doesn’t return, as the seasons change and Horton is captured by hunters. Gertrude tries to save him, but her tail is now so large she can’t get off the ground.

As Act II begins, Horton is sent to New York City and sold to a travelling Circus, (“Egg, Nest and Tree”). Whilst Horton is depressed (“The Circus on Tour”), Mayzie is sick of sunbathing in Palm Beach and decides to visit Horton in the Circus with the egg. Horton begs her to take the egg back, but she refuses and tells him to keep it forever. He swears to look after the egg and sings to it, telling it about a magical place called “Solla Sollew”.

Jojo continues to live in the Military, and is deployed to fight in the Butter Battle. Jojo tells the General that he believes war to be immoral, causing an explosion of “Green Eggs and Ham” that is thought to have killed him. The Mayor and his wife are told of their loss during their Christmas celebrations. The Cat in the Hat jumps in and brings Jojo back from the dark place he has ended up, reuniting him with his parents.

Gertrude arrives at the circus to free Horton, after having her tail trimmed (“All For You”) and she brings the clover. Horton is pleased that the Whos are safe and looks at Gertrude differently. Their happiness is short lived, as the Sour Kangaroo and the Monkeys drag Horton back to the jungle to put him on trial for talking to dust and looking after the egg. Yertle the Turtle says the clover should be boiled, and Horton tells the Whos to shout to prove their existence. Jojo has one of his ‘thinks’ and gets the whole land to yell the word ‘YOPP’ which results in them being saved and his parents finally appreciating him. The charges against Horton are dropped, just in time for his egg to hatch as an Elephant-Bird emerges. Horton and Gertrude decide they will both teach it what to do, and will raise it together.