Mel Brooks’ musical The Producers was one of the biggest shows of the past decade. Based on his original film, the musical version won an impressive 12 Tony Awards including Best Musical and was the hottest ticket on Broadway for over 6 years. Nathan Lane and Matthew Broderick led the original cast and returned to their roles throughout the run which boosted ticket sales. The show is distinctly low comedy and follows two Broadway producers who plan to make money by deliberately overselling investments in a Broadway flop musical. The show enjoyed a successful West End transfer, as well as various national tours, and was remade into a musical film in 2005. The show holds the record for the highest grossing day of sales, selling over $3.5million worth of tickets in 2003. 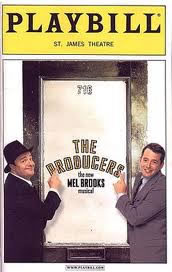 In 1959 New York City, Max Bialystock is celebrating the “Opening Night” of Funny Boy, a musical version of Hamlet. It is so atrocious that it closes after only one night. Max reflects on his former reputation as the “King of Broadway” and hopes to find a project that will equal his previous successes.

His mild-mannered accountant, Leo Bloom, arrives the next day to audit the Funny Boy accounts. A little old lady who is one of Max’s investors arrives, prompting Max to hide Leo in the bathroom. It turns out Max has been seducing sex-deprived elderly women to finance his productions. After the woman leaves, Leo reveals that there is a discrepancy in Max’s accounts as he raised $2000 more than he spent on the show.

After convincing Leo to write off this discrepancy, Max realises that a producer could make even more money on a flop than a hit by raising way more money than needed and having the production close early. He comes up with a scam to raise $2 million and then find the worst show, director, and cast possible, open the show, close after one night, and then jet off to Rio with the leftover money (“We Can Do It”). Leo is morally opposed to the project and declines.

Leo heads to work the next day to the endless harassment of his tyrannical boss, Mr. Marks. At his desk, he dreams of one day becoming a producer on Broadway (“I Wanna Be a Producer”). He decides to quit his job and go for Max’s scheme. They set off to find the worst play ever-written and find it in Springtime for Hitler, a musical romp that positively views Hilter and the rise of the Third Reich. They seek out the playwright, Franz Liebkind, who is an ex-Nazi living in Greenwich Village, reminiscing about the good times “In Old Bavaria.” They convince Franz to sign the contract and next try to find the worst director in town.
Max knows just the man for the job and they visit the eccentric homosexual Roger De Bris, who at first turns down the project as being too serious, urging Max and Leo to “Keep It Gay.” After Max mentions the Tony-winning potential, Roger agrees to take it on, but only if the ending is rewritten so the Germans win World War II. Max and Leo return to the office to find a blonde Swedish bombshell named Ulla who wants to audition for their next production (“When You’ve Got It, Flaunt It”). They immediately hire her as their secretary, as Max heads off to seduce his legion of old ladies to raise the money (“Along Came Bialy”).

Meanwhile, Ulla and Leo have begun to fall in love (“That Face”), while Max only lusts after Ulla. At auditions, Roger rejects every actor that comes by, until Franz auditions for his own show and is summarily hired to play Hitler. Opening night rolls around again, but Franz suddenly falls and breaks his leg. As Roger is the only other person who knows the role, he goes on in the premiere of “Springtime for Hitler.” However, due to his over-the-top camp performance, the audience believes the play is meant to be a satire and are roaring in the aisles. The play is a huge success and becomes the biggest show on Broadway, much to Leo and Max’s distress.

Max and Leo flee to their office, wondering how the got into this situation (“Where Did We Go Right?”). Franz arrives to confront them for corrupting his play, threatening Max with a pistol. The police turn up and arrest Franz and Max, and confiscate all of the accounting books. Leo and Ulla manage to escape and plan to head to Rio together with the two million dollars.

At trial, Max is understandably found guilty of fraud, but at the last moment Leo and Ulla arrive to testify on his behalf. The judge is moved and decides it would be unfair to separate Leo and Max, so he sends them both to prison for five years. While in jail, they write a new musical called “Prisoners of Love,” which stars Ulla and becomes a major hit. “Leo and Max” solidify their reputations as the biggest producers on Broadway.