Often called the ‘first American folk-opera’, Gershwin’s Porgy and Bess opened in its original form in 1935. The piece was not recognised as a success in the author’s lifetime, and it is only in recent years with the development of larger opera companies that the show has been successfully and commercially performed. Two ‘musical’ versions of the show have been produced in London and in New York, with the 2012 production being the longest running production of the show. The piece has not been without its controversy and troubles, with claims of racism in its portrayal of the characters of Catfish Row, along with the heavily written dialect. 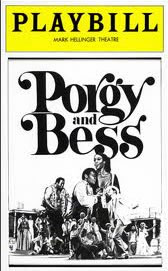 After a short introduction the curtain rises on the inhabitants of Catfish Row. Jasbo Brown plays the piano for the community whilst Clara, a young mother, sings a lullaby to her newly born baby. The men prepare to play a game of craps, and Clara’s husband Jake attempts to educate his son about Women and their role in life. A disabled beggar, Porgy enters and tries to join the game of craps. Crown, a strong and intimidating man buys some ‘Happy Dust’ from Sportin’ Life, and is joined by his woman Bess who the other women hate. Robbins and Crown fight, ending in a brawl in which Crown kills Robbins with a cotton hook. As he runs from the police, he tells Bess to hide and that he will return later when the police leave. Bess tries to find shelter, but the only person to come to her aid is Porgy.

At Robbins’ wake, the community gather to collect money for a burial. Bess arrives with Porgy but everyone rejects her donation, until she explains that she lives with Porgy now. Peter is accused of the murder, but he tells the police it was Crown’s work, as they convince the detective to bury the body. Bess sings a gospel and is welcomed into the community.

A month later and everyone notices that Porgy has become a lot more cheerful since Bess arrived in his life. The men prepare to go out to fish despite news of storms. Sportin’ Life tries to sell his ‘Happy Dust’ and attempts to get Bess to run away with him to New York. The residents of Catfish Row are preparing to go on a church picnic to Kittiwah Island, but Porgy can’t go because of his disability. Left alone, they declare their love for one another.

At the picnic, Sportin’ Life presents his somewhat cynical views on the bible to keep people entertained. Crown appears and accosts Bess, reminding her that Porgy is only temporary and tries to kiss her. When she refuses, he drags her into the woods and rapes her.

Back at Catfish Row, Bess is suffering from a bad fever. Porgy can tell that she has been with Crown and she admits that she is scared of the hold that he has over her. Porgy tells her she should just leave him, but she refuses to do so. The hurricane bell begins to ring and Clara watches the water, scared of what could happen to Jake. Everyone gathers in the storm shelter and sings prayers to God to keep them all safe. Crown arrives at the shelter to taunt Porgy, as Jake’s boat floats past them upside down. Clara rushes out to try and find him. Crown leaves as the storm begins to rise.

Act three begins as the residents mourn the death of Jake and Clara. Bess sings the lullaby to Clara’s baby, as Crown enters and once again tries to claim her as his woman. He fights with Porgy, and is killed. Porgy admits to the killing and is dragged off. Sportin’ Life tries to convince Bess to leave with him to New York and gets her hooked once again on Happy Dust.

Porgy wins money whilst in jail by playing craps and is released awaiting trial. He is excited to return to Catfish Row and has bought a new dress for Bess. As he arrives he realises quickly that something is wrong, and is told that Bess has left for a new life in New York with Sportin’ Life. He grabs his cart and is determined to travel to find her – praying to God for guidance.