Disney’s The Lion King is a multi-award winning hit musical that has achieved worldwide success. Based on the 1994 animated film of the same name, the stage version uses the hit songs by Elton John and Tim Rice as well as an expanded score with additional music by Hans Zimmer and Lebo M. The production was directed by Julie Taymor and produced by Disney Theatricals. It originally opened in 1997 in Minneapolis before transferring to Broadway’s New Amsterdam Theatre for an official opening on November 13, 1997. The show has now been seen all around the world. 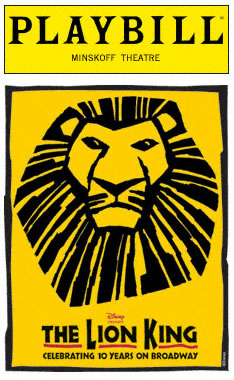 The 1994 Disney film of the same name

Adapted from the screenplay by Irene Mecchi, Jonathan Roberts and Linda Woolverton

A lion cub overcomes his evil uncle in order to take his place in the great circle of life in Disney’s Hamlet inspired mega-musical.