Joseph and the Amazing Technicolor Dreamcoat is the first musical offering from Andrew Lloyd Webber and Tim Rice. The show is based on the Book of Genesis in The Bible and the story of the ‘coat of many colours’. The show started life as a 30 minute long cantata written for a primary school. After the concept album was released and the success of their next musical collaboration, ‘Jesus Christ Superstar’, the show mounted a full scale production. The show continued to be modest in size and developed with each production, until the ‘definitive’ London Palladium version that starred Jason Donovan. This fantastic revival added new music and a mega-mix, becoming one of the most popular West End shows in the early 1990s. The show is currently performed all over the world by schools and youth groups and is instantly recognizable for generations of theatre fans. 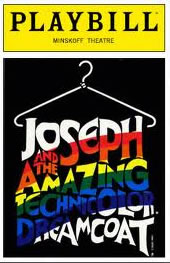 The show begins with a Prologue in which the Narrator invites the audience to dream, as Joseph takes to the stage and tells the crowd that ‘Any Dream Will Do’. We then go back to the beginning of the tale in Canaan where Jacob lives with his many sons and wives. His favourite son Joseph is given a multicolored coat to wear than angers his brothers who want to take it from him. Joseph begins to tell them of the dreams the coat has made him have, which include his superiority over them in the future. The brothers are sick of hearing about his dreams and hatch a plan. They mug him and sell him to some travelling Israelites, then pretend that he has died by dipping his coat in blood. They tell Jacob who is distraught, although the brothers are happy that he is gone.

Joseph is sold to Potiphar and rises up to be one of his attendants. Potiphar’s wife makes advances on Joseph and he is cast out to prison. Whilst in jail he is approached by a Butler and a Baker who ask him to interpret their dreams. He predicts good things for the Bulter and a sinister end for the Baker.

The Narrator tells how Joseph’s fortunes change, as the Bulter recommends him to Pharaoh who has been suffering from bad dreams. Joseph comes from prison and interprets his dreams as meaning they will have seven years of bumper crops followed by years of nothing, and they must prepare for the years ahead. His predictions turn out right and Egypt survive due to his interpretation as the Pharaoh promotes him to his number 2.

Back in Canaan the famine has hit Joseph’s family hard. They decide to travel to Egypt to beg for food. The brothers fail to recognise Joseph and he plays a trick on them, hiding a cup in youngest brother Benjamin’s sack. As they are caught the brothers sacrifice themselves for Benjamin and Joseph realises they have now changed their ways and reveals his identity. The brothers are shocked and look for forgiveness. Joseph tells them to bring Jacob to Egypt and they are all reunited together.