Grease is one of the coolest musicals to ever grace the West End and Broadway stage. Featuring a score by Jim Jacobs and Warren Casey, the musical is named for the 1950s working class youth subculture in the USA who were known as ‘greasers’. Set in a fictional High School, the show follows a group of boys and girls in their senior year as they deal with all sorts of teenage angst, from drive ins to burger bars and teenage pregnancy. The show is one of the most performed musicals in the world and was made famous by the 1978 movie starring Olivia Newton John and John Travolta. 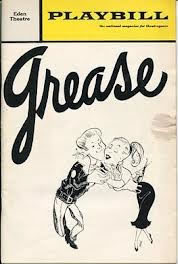 High School drama on a summer night leads to an unlikely couple who break the social mold, proving that PVC always helps win your man.

It’s 1959 and a new school year for seniors at Rydell High School. After an eventful summer, the Burger Palace Boys and the Pink Ladies settle back into their school routine and parody their school’s Alma Mater. They sit at opposite sides of the dining hall, whilst they hear about everyone’s successful summer romances. New girl at school Sandy Dumbrowski is pulled into the pack of Pink Ladies who quiz her about her summer romance with a mysterious man. Whilst she tells the girls about their emotional connection, Danny Zuko tells his side of the story to the Burger Palace Boys, focusing much more on the physical. Danny and Sandy soon bump into each other in the corridor, and whilst Sandy is excited to see Danny, he brushes her off trying to be cool. Doody entertains the school with his new guitar, giving a concert in the bathrooms.

Marty hosts a pajama party to initiate Sandy into the Pink Ladies. They talk about wine, cigarettes and try to pierce Sandy’s ears. Marty tells the girls she is in love with a Marine named ‘Freddy’. The boys meanwhile tease Kenickie about his new broken down car, nicknaming it ‘Greased Lightning’.

At school Sandy is recruited to join the cheerleaders by class president Patty Simcox. Danny tries to apologise to Sandy but she refuses to speak to him, wishing they hadn’t met. Rizzo teases Danny about picking a real life ‘Sandra Dee’. The gang decide that they will always stay together, even after High School ends.

The High School Hop opens Act II and the kids from Rydell High are partying in the school gym. Sandy stays at home feeling sorry for herself, singing about it raining on prom night. The dance is hosted by their favourite DJ Vince Fontaine who leads a hand jive competition amongst the couples. Danny and Rizzo are supposed to dance together, but Danny dances with Cha Cha from a rival school, causing much upset. They win the contest and Rizzo and Kenickie dance together. Sandy hears about Cha Cha and feels betrayed.

At the Burger Palace the gang run into Frenchie who has dropped out of Rydell High and now also Beauty School. Danny takes up the track team in order to win back Sandy, but she is not impressed. Cha Cha’s boyfriend’s gang have challenged the Burger Palace Boys to a rumble, but Danny is too focused on winning Sandy back. He invites her to the drive in movie, but moves too fast for her and ends up being alone once again. Jan hosts a party in her basement and the group listen to each other sing and wonder about life after High School. Rizzo reveals that she may be pregnant, and tells Kenickie that he is not the father. She struggles to find sympathy, saying ‘There are Worse Things I Could Do’. Sandy also questions what she can do to fit in, and the girls come up with a plan.

Sandy is transformed into a greasers ideal woman, with leather pants and big hair. Danny is astounded at the change and the two are finally together. Rizzo finds out she isn’t pregnant after all, and the gang are all happy as they rush towards their final days in High School.

SONGS ADDED FOR THE MOVIE

The show has been nominated for 11 Tony Awards, but has won none.