An American in Paris is an all-new dance musical, based on the 1951 Academy Award winning film of the same name, starring Gene Kelly and Leslie Caron. Originally premiering in Paris, the production officially opened at the Palace Theatre on Broadway and is set to transfer to the West End for a run at the expansive Dominion Theatre. Following a soldier who remains in Paris after the victorious Second World War, An American Paris is a beautiful love story of an artist and dancer uniting in a post-war France. Featuring several well-known songs from hit musical duo George and Ira Gershwin, this Tony Award-winning musical includes “I Got Rhythm” and “An American in Paris” in its sumptuous score. 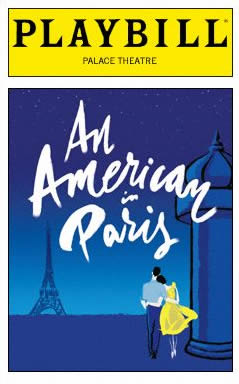 A magical story of a soldier and dancer united in a celebratory post-war France, filled with wonderful dance and timeless classics.

Set during the end of a viscous World War II, An American in Paris follows American soldier Jerry Mulligan, who decides to abandon his backpack and remain in Paris to nurture his passion for painting. Helped by friend and ex-soldier Adam Hochberg, who dreams of being a composer, as well as Henri Baurel, a son of wealthy French industrialists, Jerry begins to dream of a brighter future without fighting.

Soon, he meets a mysterious French girl, Lise Dassin, and is convinced that he made the right decision to stay in France. After completely falling for her, Jerry discovers that she is the very same girl that Adam and he have been encouraging a smitten Henri to propose to. Stuck in a dilemma, Jerry makes friends with a headstrong American philanthropist, Milo Davenport, who plunges him deep into the Paris art scene that is exploding with new life and a celebratory post-war energy.

Meanwhile, Lise struggles to choose between a comfortable life with Henri and her true love, Jerry. As each man involved begins to come to terms with his own fate, it is revealed that Lise’s obligation to Henri comes from that fact that he and his family saved her life during the occupation. When it is realised that this bond is no longer strong enough, Lise and Henri agree that it is time to let go.

As the curtain falls on the miraculous opening night of a French ballet, Lise finally claims her place as a free, accomplished and successful artist in France, and quickly realises that she is meant to be with Jerry. Rushing to him, the pair reunite at the River Seine and walk off, arm in arm, into the Paris night.