American Idiot is a concept rock musical based on the album of the same name by American band Greenday. The show brings together a number of the band’s hits in the same order as the album, dramatising the overall concept that the band originally wanted it to use. The musical is a one act show and follows a simple story line set in the recent past. The show was directed and conceived by Michael Mayer who worked with Greenday front man Billie Joe Armstrong in creating it. Although a number of songs from other Greenday albums are used in the show, it is primarily based on the American Idiot album. The show was successful on Broadway for just over a year and featured the lead singer in the lead role towards the end of the run, boosting ticket sales. A UK touring production opened in late 2012. 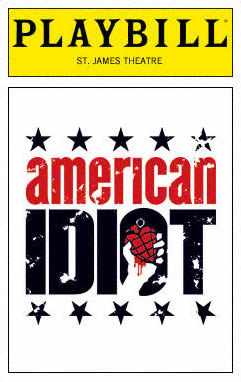 American Idiot is set in the recent past and begins with a group of young people living in suburban America who have become saturated with TV. They are frustrated with life and the state of the union. Johnny commiserates with his friend Will and are later joined by Tunny. They party together until they run out of beer. Tunny talks about the state of their life, forgotten by society with nowhere to go. Will’s girlfriend Heather arrives and she is pregnant, not knowing whether or not to keep it. Johnny buys tickets for them all to get out of suburbia as Heather confesses to Will about her pregnancy. He stays at home whilst Johnny and Tunny head for the city.

Johnny wanders the streets and struggles to adjust to urban life. He sees an advert for enlisting with the army and realises that the youth of today are so numbed that nothing can excite them. He is unimpressed by the bright lights of the city and enlists with the army. He tries heroin for the first time, whilst at home in suburbia Will sits and watches his girlfriend’s pregnancy develop. Tunny is sent to a war zone and is shot and wounded.

Johnny meets a girl he calls ‘Whatsername’ and takes her to a club where they shoot drugs and later have wild sex. Heather is meanwhile committing to her new born baby. She is sick of Will’s apathy and walks out on him, taking her son with her. In hospital Tunny hallucinates and falls in love with his nurse.

Johnny begins to rely on drugs and lets his alter-ego St Jimmy take over, becoming erratic by threatening Whatsername with a knife. He decides to leave her, choosing drugs and Jimmy over her. Whatsername tells him that he is not ‘Jesus of Suburbia’ and brings him back down to earth saying he is only a figment of his father’s rage and his mother’s love.

Johnny is hurt by her outburst and begs for a better life. Tunny wishes to get out of hospital and Will longs for his child and girlfriend back. St. Jimmy makes a final attempt to get Johnny’s attention but he rejects him. He takes a desk job but soon realises he is not cut out for the city.

Will sits alone with his television, depressed about his position which is made worse when Heather brings her new rock-star boyfriend round. He heads to the 7-Eleven to escape them, bumping into Jonny who has sold his guitar for a bus ticket home. Johnny laments the loss of his love as the full company ponder on the possibility of hope.